Written by Igor Bitkov
Leave a comment
[warning]WARNING: The following historical analysis may contain illustrations not suitable for general public discretion is recommended.[/warning]

On May 9th, every year Russia celebrates the Victory Day. On this day, the authorities organize military parades, so great, that it is difficult to even imagine them. People like this party. You can say that for Russians, this celebration is more important, than any other. In recent years the greatness of the celebration surpasses by many times the celebration in past years. The government spends huge amounts of state money for this party. All State media accompany the celebration with propaganda of patriotism, nationalism and militarism.

The most popular symbol used on this day by many citizens is the image of a person with the Russian flag having sex with another person with the German flag, which I show below for “ILLUSTRATIVE” purposes, clarifying that it is not an image of my taste. This image translated into English says: 1941-1945 “We can repeat“ (можем повторить)

This is used to show that, Russia won the war against Germany, and they compared it with rape, as if they raped Germany. For me, this new symbol, used by Putin propagandists, to raise patriotism, is the symbol of the degradation that undergoes the dictatorship and the Russian people.

I leave ethical issues aside. I want to analyze a little bit the history of World War II, that the Putin dictatorship currently uses to raise its image.

It should be remembered that, in World War II (WWII), USSR and Germany entered as allies. Precisely their alliance was the beginning of this war that took more than 80 million lives worldwide. On August 23, 1939 was signed the Pact between Germany and USSR that established the alliance between two military powers and its secret protocol divided the eastern part of Europe between them. For Germany it was granted the western part of Poland and Lithuania, for USSR – Finland, Estonia, Latvia, the eastern part of Poland and the eastern part of Romania. USSR took the obligation to supply Germany with raw materials and food. Fulfilling this pact, on September 1, 1939, the German army attacked Poland. 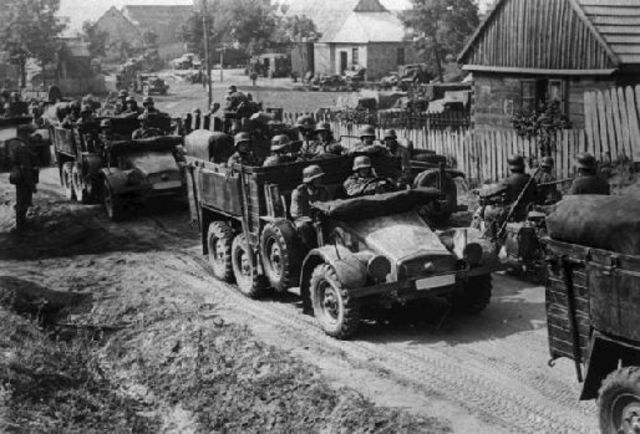 On September 17, the Soviet army also attacked eastern Poland. Thus the defeat of Poland was determined. The two largest armies in the world beat Poland on two sides. On September 28, the USSR and Germany signed a new treaty of friendship, which established the new frontiers, dividing Poland into two parts, the largest was occupied by the USSR. On this same day they made a military parade where the armies of Germany and USSR, marched together, one after another in the Polish city of Brest.

The cruelty of the Soviets was comparable or even surpass the cruelty of Germans. The Russian people Catullus left testimonies of this cruelty, where in one day more than 5,000 Poles – prisoners of war, were shot.

In the following two years, Germany defeated and occupied France, Norway, Denmark, Holland, Belgium, Yugoslavia and Greece. The British army was defeated in Europe. At the same time USSR, fulfilling its duty as ally, supplied Germany with metals, oil, fuel, wood, ammunition, wheat and other strategic products. On its behalf USSR occupied Estonia, Latvia, the eastern part of Romania and Lithuania, where it violated the pact with Germany, which established that this country was part of the German control. The great failure for the USSR was the war against Finland. 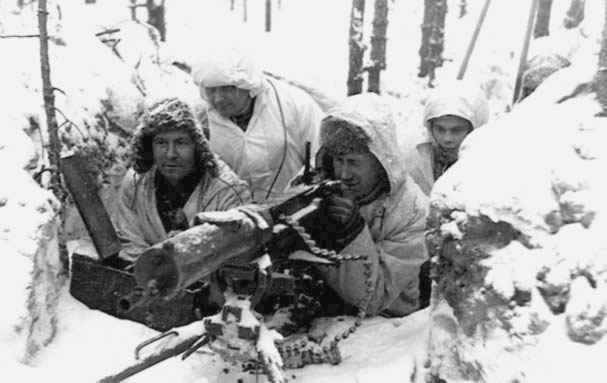 The small country gave fight to their occupiers, where USSR lost almost 300,000 men, which was 10 times more than the losses of Finland. At the end USSR did not reach its goals and was forced to sign peace by receiving only the small eastern part of Viborg, a city of Finland. For this aggression, USSR was excluded from the League of Nations as the aggressor – country. This war, too, showed Hitler – the weakness of the Red Army, despite its huge numbers of soldiers, cannons, airplanes and tanks.

The two dictators, Hitler and Stalin had the same purpose – world power. Their alliance could not last long for this reason. Their confrontation was predestined. Stalin was concerned about Hitler’s successes and his rapid strengthening. He began to prepare the war against Germany in 1941. The Red Army was concentrated on the German border and had plans to advance. Hitler discovered these preparations of Stalin and decided to strike preventively. On June 22, 1941 the German army crossed the USSR frontier in full length.

The coup was a catastrophe for the Red Army. The total weakness of the communist system was confirmed. Just after two months of the war the army, that had 10 million soldiers, 20 thousand tanks, 10 thousand airplanes, was defeated. Germany which had 2 or 3 times fewer soldiers, tanks and airplanes managed to occupy the entire western part of the USSR and approached Moscow. More than 4 million Soviet soldiers were captured and became prisoners of war. Two third of Soviet industry either remained in the hands of the enemy or were destroyed. This defeat was a bad surprise for Great Britain and the USA. If the USSR had fallen, the superiority of Germany could have been absolute. The allies decided to lend their full support to the USSR to avoid their final defeat that was so close. 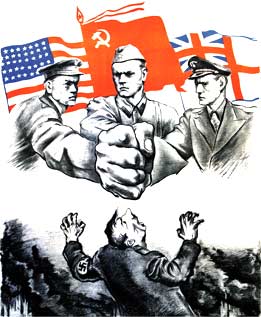 The aid program was called “Lend – Liz” and meant that EE. UU provided arms, ammunition, food, fuel and many other things to keep the war, even complete factories that produced planes, tanks, and so on. According to the program the payments had to be made after the war and did not include everything that was destroyed in combat. For USSR this help was vital. Fulfilling this program throughout the whole war the USA lent the USSR: 18,000 aircraft, 20,000 tanks, 478,000 trucks and cars, 500 ships, 1977 – locomotives, 11155 wagons, 16,000 military shoes, almost all food and medicine for the army, almost all aircraft fuel and many other things. All the aid provided is equivalent to 50,000 tons of gold. The shortest route to take all this to USSR, was by the Barents Sea to the Murmansk port. The Germans always attacked this route and the Allies used their huge fleet to protect their ships. A total of 99 ships were sunk with their cargoes and crews. This was the price of victory. Without this aid, USSR had no chance to survive in this war. I can also say that the Allies fought Germany, Japan, and their satellites in the Pacific, in the Atlantic, in Africa, in Europe, spending enormous resources and leaving Germany worn and ruined. Today the dictator of Russia – Putin, like his ancestor: Stalin, tries to seize the victory and use it to justify his dictatorship, creating the myth of Russia’s false superiority. After the war, all Russian authorities tried to hide the truth about the war and the price that was paid for the victory. For example, till this year was published the true number of the dead citizens of the USSR in the war, which was formerly the secret. This number is a terrible thing. There are almost 42,000,000 men and women dead. This is much more than any other country involved in the war lost. Here I can show the losses of several other countries:

As we can see, the USSR lost more inhabitants, than all the other participants of the WWII together. This huge number of USSR losses, is a special and great subject, which I will not touch in this article, but so it is clear, that the price of victory is too high to be joyful. Germany, which fought against the whole world lost less than 7 million inhabitants and USSR – almost 42 million, which is seven times more. Knowing this, I want to ask the current Russian authorities, who promote this symbol of “We can repeat”:

“What do you want to repeat?”

“Do you want to sacrifice a quarter of your population again?”

We know that all that the current Russian authorities speak is a farce, which serves only for propaganda, but I see in this farce the contempt and mockery of such an enormous sacrifice that my people paid for their victory and now they live in extreme poverty, unlike the Germans who they beat.

The average salary in Russia is $400 per month and in Germany $4000, which is 10 times more. Many of my relatives never returned from this war. My dad never met his dad, who was killed in the war, when he was not yet born. I do not want to repeat this tremendous phase of our history. There are hardly any veterans alive from this war in Russia, but I remember that in the days of my childhood, when veterans celebrated this day, the most common toast was:

“May this war never be repeated,” they said with tears.